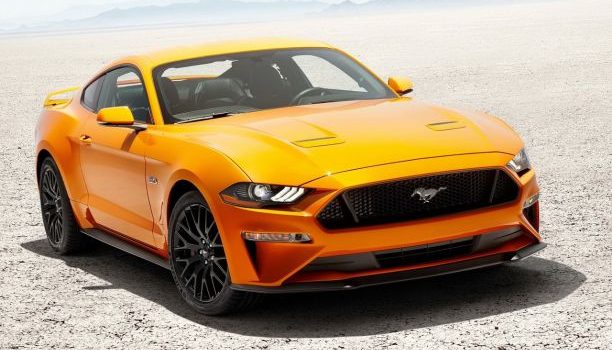 This year, the Ford Mustang celebrates its 50th anniversary with great fanfare as it takes the opportunity to unveil its 2014 generation, which we will come back to in more detail later in the article. Born Pony Car, understand a coupe of great economic series because taking again the technical undersides of a saloon of great diffusion, the Falcon at the origins of the Mustang of 1963, it was intended as well for the women as for the men. Lee Iaccoca, Chrysler's iconic boss then product manager at Ford, hit the nail on the head with this concept, since it was a great commercial success right from the start.

It was only later, especially with the 2005 generation, that the Mustang emancipated itself from the technical undersides of the sedan and became the Muscle Car, so emblematic of the USA. The name Mustang is emancipating itself from the Ford brand and has even become one of the most famous in the world, alongside Apple, Coca Cola and Google, excuse me for a moment! To better prove its reputation, it is now called a Mustang as it is called a Clio or a Golf, for example.

It is almost curious that the Mustang has such a reputation in Europe because after all, only the first generation was imported into Europe. Fortunately, however, because the following generations, until 2005, experienced mistakes that could have been fatal. In 1974, the Mustang, because of the first oil shock, was out of the sports category by not even adopting a V8. In its place under the hood, a poor 2.3-litre four-cylinder engine with 88 miserable horses and still a V6 but only 2.8 litres and 105 hp. In other words, the Mustang had fallen to a very low level....

Fortunately, the Mustang underwent a transformation in 2005 and by returning to its original lines, it will also find its legendary mechanics again, hosting a good big V8 that will go so far as to develop more than 800 hp with the extreme versions developed by Shelby and with the evocative names of Boss or SuperSnake. However, the Mustang could no longer hide its technical wrinkles to much, as it still used a prehistoric rigid rear axle mounted on leaf springs.

And then the Mustang began to look enviously at its eternal rival, the Chevrolet Camaro, which has been imported into Europe since its rebirth in the 2000s, where it has enjoyed great commercial success. The Mustang had to evolve radically and that's what it's doing splendidly with this 2014 generation.

To begin with, this 2014 Mustang will be officially imported into Europe, where Ford has no shortage of sales outlets. But it will not be until 2015, as the car is exclusively manufactured in the USA and the domestic market must be well supplied before thinking about the rest of the world.

Then, if the Mustang takes up the general line of the 2005 model and especially the Hatchback version made famous worldwide thanks to the immense Steve McQueen and the most beautiful pursuit of contemporary cinema, I named the detective film Bullit, it modernizes everything in a very beautiful way by daring to abandon two typical stylistic features, the round headlights and the profile of the side window called a hockey stick.

Fortunately, it keeps its most famous signature, the three-buckle tail lights and remains a Mustang because you can recognize it at first glance, a nice feat by Ford's stylists. The revolution continues with the chassis which finally abandons the old rigid bridge and leaf springs for a very modern multi-link rear axle and coil springs. The Mustang even adds a limited slip differential called active, capable of regulating the power wheel by wheel.

The revolution continues under the hood as the 2014 Mustang finally abandons the V8 and returns to the four-cylinder engine. But beware, no scandal in sight as on the calamitous 1974 version, this four-legged vehicle is all the more modern with its double-stage supercharging, variable valve lift, direct fuel injection, energy recovery system and even Start & Stop! It must be said that this engine has something to hold on to since it already powers the Focus ST where, with its two litres, it develops 250 hp.

But the Mustang does better than its little sister as the four-legged vehicle climbs to 2.3 litres and 303 hp. Above all, it delivers much more torque than the old V6 and consumes much less fuel. In other words, this version is worthy of the legend, especially since it guarantees very economical access to the Mustang range since this engine is sold for less than €30,000 across the Atlantic. Unfortunately, this will not be the case in Europe, as taxes have been passed there....

To conclude, the Mustang will not forget the purists this time since a V8 version is on the program and its versions due to Shelby will certainly bring the Legend to life with panache, as it should be!